Why We Have Them, What They Do, and Troubleshooting

Arc Fault Circuit Interrupters (sometimes marked or sold as ‘combo’ breakers these days) are a special kind of breaker that spends all of its’ time waiting for an arc fault to occur in a circuit and then trips – disconnecting power to that circuit.  All kinds of things can, and do, cause miniature arcs: damaged or deteriorating wiring including punctured wires, cable staples, drywall screws, poorly installed outlets or switches, cords caught in doors or under furniture, furniture pushed against plugs in an outlet, natural aging, and cords exposed to heat, vents, and sunlight.  Those are homeowner created arcs – but it’s’ possible existing wiring can also cause issues such as: bad equipment plugged in on the circuit, problematic connectors, wires too close to each other, crossed neutrals, shared neutrals, grounded neutrals, and shared neutrals that are also grounded.

An arc fault is an unintended arc created by current flowing through an unplanned path. Arcing creates high intensity heating at the point of the arc resulting in burning particles that may easily ignite surrounding material, such as wood framing or insulation. The temperatures of these arcs can exceed 10,000 degrees Fahrenheit.

Not only that, but Mike Holt – a leading voice in the nation on electricity, wiring, and safety – definitively states that ‘60% of fires are from causes in the fixed wiring, switches, receptacle outlets and lighting fixtures that are part of the fixed electrical system of a residence’; the National Fire Protection Association reports that between 2007 and 2011, fire departments responded to 47,820 home fires involving electrical failure or malfunction.  This led to 455 deaths and 1.5 billion in property damage.  Their statistics go so far as to show that 63% of the fires and 50% of the deaths came from the electrical distribution or lighting equipment.  The sense of urgency that not just fire prevention and electrical safety personnel have for these new breakers comes from the deep desire to limit, if not completely eliminate, the possibility of electrical faults in homes. Code implementation has been in small increments through many years – and revisions – of the National Electrical Code.  Part of the reason for this is due to the fact that these breakers are more cost prohibitive then a traditional one – $30-$50 (or more) versus $3-5 on some more traditional breakers.  Initial introduction was into bedroom circuits, and eventually the intention is to implement the breakers system-wide.  While the code is advancing, the designer of breakers and load centers are also making technological leaps and bounds – what was once an uncertain, unstable technology is now becoming reliable and commonplace for residential customers.  This means that when you have a licensed electrician out to work on your circuits, electrical panel, or outlets, it is possible that they will update your electrical wiring system with one of these new breakers – or an AFCI outlet – to make sure that your home is the safest place it can possibly be!

When electricians began initially implementing AFCI technology, the most common complaints were about ‘nuisance tripping’, and electricians would usually just replace the faulty breakers in order to update the circuit technology.  However, the sensors and circuitry has improved so much that the most frequent cause of AFCI breakers tripping (and refusing to reset) is due to arc faults that actually exist in the circuits themselves.  This means that it is possible for a homeowner to do some basic troubleshooting themselves before calling out a licensed professional to troubleshoot and/or repair the circuit.  Be sure to try resetting your AFCI circuit breaker after each of the following steps.

Steps to troubleshooting an AFCI circuit:

Don’t ever hesitate to reach out to Colorado Springs Highest Rated electrician, Swartz Electric for all your troubleshooting and electrical system repair needs or questions. 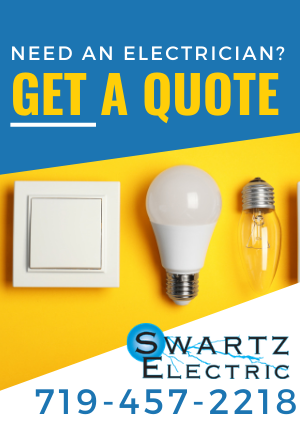