Why A Blue LED Could Save the World

Why A Blue LED Could Save the World

–  And why it really does deserve a Nobel Prize.

On October 7th, 2014, the Royal Swedish Academy of Sciences released that the 2014 Nobel Prize for Physics was being awarded to three Japanese scientists who developed the blue LED in 1993.  Isamu Akasaki, Hiroshi Amano and Shuji Nakamura worked physically separate and yet of one mind (itai doshin) on their goal of achieving blue light via semi-conductors.  While LEDs have existed since 1907, white electroluminescence was not capable of being produced without the key spectrum element of blue.

Unlike the color spectrum – where the three primary colors combine to make black – the light spectrum requires all three visible colors to achieve what we visually perceive as white.  LED’s, as a technology, were not technically usable as a primary light source without the key element of blue.  Between 1907, when electroluminescence was discovered by Marconi Labs, and 1968, when The Monsanto Company began mass-producing LEDs as flashing indicator lights, very little progress was made except to discover new conductor chemical compounds to use in order to bring down their production costs.  In 1976 LEDs were moved towards communications and  fiber optic applications, while they slowly – and cheaply – began to replace incandescent and neon indicator lamps in vehicles, appliances, commercial and industrial equipment.

I have written before about the great war between Tesla and Edison, about the financial power of switching to LEDs, and about the future of lighting.  It is no secret that I know the coming century will be about the battle of the bulbs – weaning the public off of expensive and resource consumptive lighting and moving to low-wattage alternatives; more specifically, LEDs.  Part of the reason why this movement is going to be so monumental, I believe, is because LEDs will fill many needs – both to come, and already existing.

Approximately 1.2 billion people currently live in areas of the world without electricity, known as ‘off-grid’ areas. Gaining access to a clean, reliable, and affordable light source is a critical issue in these areas, such as in Sub-Saharan Africa and Southeast Asia. Light is a fundamental need we all share, and those without it face significant challenges…  Kerosene lanterns are a common off-grid light source used to combat these issues, yet an evening of breathing in a kerosene lamp’s emissions is equivalent to smoking two packs of cigarettes, and their open flames carry the risk of burns and house fires. Additionally, kerosene is expensive, with off-grid households spending an average of 10-25% of their monthly budget on the fuel. While polluting homes at the local level, kerosene also impacts the environment on a global scale, releasing 190 million tons of CO2 into the atmosphere per year.

This quotation comes from the Little Sun project – a collaborative effort between artist Olafur Eliasson and entrepreneur/innovative thinker, Frederik Ottesen – whose goal is to bring a hand-held, solar-powered LED light to every business and household who lives without direct access to electricity.  Using a half-watt LED, this light provides 40 lumens of light for 4 hours on a full charge (and ten hours of soft light thanks to it’s two-way switch).  Shipped with rechargeable batteries, it’s a lightweight, portable, solar-powered LED that is designed for individual, family, business, and community use.  Purchasing one in a developed nation costs more – but it pays for at-cost ones to be distributed through off-grid communities.  By using locals to sell and distribute their suns, the project also fuels regional entrepreneurial spirit and small businesses.

Not feeling confident about solar powered lights?  Then consider the gravity light – a kinetically-powered LED system that is powered for 25-30 minutes by lifting a weight.  This means you could have light all night long if you have the energy to lift a bag of dirt.

This LED diode was submerged in 3 feet of water and still functioned perfectly.  It just so happens, however, that this light is specifically designed to purify and sanitize water – so the fact that it can be functionally waterproof means it will revolutionize the world of water purification.  UV-C lights are already changing the way UV water purification occurs – now, we can change it on a global scale.

A test performed by Korea Conformity Laboratories (KCL) found that this product removes 99.99% of E. Coli, salmonella, and other germs within 5-liters of water contained in 25 minutes

This means we are only a few years away from being able to provide anyone on the earth with a solar powered water purification system.  Heck, you could even power it with a stationary bike if you’d like – each 7 mm square chip only consumes something like a tenth of a watt of electricity.  A solid state water purification system could use 20 of them and about two watts of electricity to provide clean, fresh drinking water for anyone, almost anywhere.  For more information, check out the article on LG Innotek’s amazing breakthrough in UV-C LED technology.

Say hello to your new computer, tablet, and cell phone – all in one, and with an amazingly powerful, super-rich HD display that is both riveting – and interactive.  The material is an OLED – organic LED screen – and not only is it flexible, bendable, and conductive, but it is beautiful and functional, too. 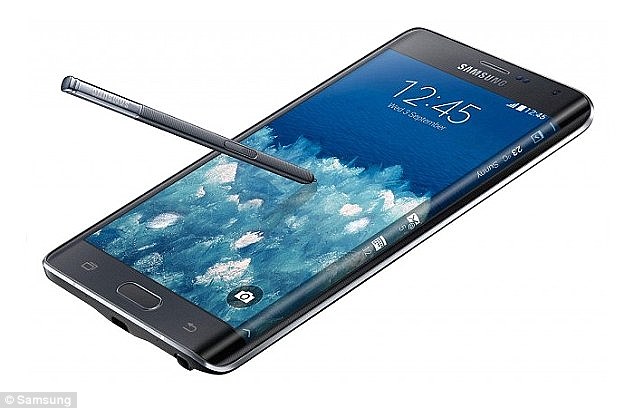 While it is an incomplete one, this list of reasons helps outline some of the points as to why I think the invention of the blue LED is worthy of a Nobel Prize.  This is all thanks to developments that began in 1993.  Do you agree, or disagree?  What are your thoughts?  Don’t hesitate to let me know in the comments below!

Also – don’t forget: It is voting time for Best of the Springs 2015!  Every vote is needed and YOUR VOTE COUNTS!