The Fundamentals of Fluorescent Lights

The fluorescent lightbulb.  That inevitable tube of luminescence that we encounter everywhere – from our computer desk lights, workshop fixtures, office overheads, and grocery store aisles.  They are pervasive, everywhere – but what are they?  Why is it that even though they are brighter and more popular than regular bulbs, they don’t produce anywhere near as much heat as an incandescent and they use a lot less electricity?

HowStuffWorks.com has a great article, which simplifies the process thusly:

Fluorescent lamps come in all shapes and sizes, but they all work on the same basic principle: An electric current stimulates mercury atoms, which causes them to release ultraviolet photons. These photons in turn stimulate a phosphor, which emits visible light photons. At the most basic level, that’s all there is to it! 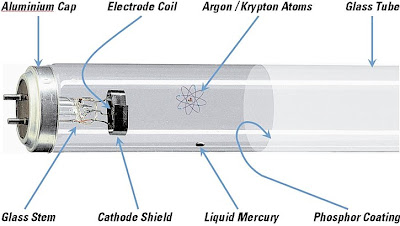 It’s true that we see many forms of fluorescent bulbs that come in multiple shapes, sizes, and functions – but in essence their purpose and function is nearly identical.  Not only that, but recent years have seen the advent of the CFL (compact fluorescent lamp) where we have even miniaturized the process.  This has turned fluorescents from being specially shaped and sized bulbs we have to engineer and design for in to something we can screw in to almost anywhere. One of the most fascinating aspects of fluorescent lights, however, is the fact that once the gas inside the lamp has energized it actually transmutes into a substance referred to as plasma.  Considered one of the fundamental states of matter, plasma is a super-energized state of matter; it behaves unlike any gas, liquid, or sold.  Scientists believe that 99% of space is full of it, however!  In an article written in 2001, Dr David P Stern called the plasma in a fluorescent lightbulb a ‘greedy conductor’ because it does not follow Ohm’s laws of electrical resistance.

The resistance of your fluorescent lamp is not fixed, it depends on the current carried: the greater the current, the smaller the resistance.  Put in other words, the plasma is a greedy conductor of electricity. Suppose it has just enough free electrons to get a current started. The current causes ions and electrons to move rapidly and to collide violently, and those collisions strip additional electrons off atoms of the gas. Additional electrons increase the current, causing more collisions and producing still more electrons, which create more current, more and still more… In this way, if a fluorescent lamp were directly connected to the power lines, unprotected, its current would rapidly grow until something gave way. The tube might heat up and explode, the wiring might melt… or more likely, the fuse or circuit breaker which protect the fixture would stop the current.

The concept is bizarre and yet so cool at the same time!  For an example of how fluorescent lights are plasma emitters that operate at a super fast rate, check out this very neat YouTube video featuring unpainted fluorescent tubes  streaming plasma:https://www.youtube.com/watch?v=A-kf5mvS3WEWhere else do we find plasma every day?  (It exists in vast quantities throughout space, but due to the lack of oxygen we don’t normally spend much time there.)  In high definition plasma displays, of course, like those in TVs and expensive computer monitors.  We also utilize plasma in welding or torches – but the most common place you or I will ever personally have an encounter with plasma?  Static electricity – including lightning.

The plasma fluorescent lights create emits radiation in an invisible spectrum.  In order to make usable lights, manufacturers coat the inside of the glass tubes with unique compositions of phosphor which affect the visible spectrum of light created by their bulbs.  In this way, the ‘invisible wavelengths’ become visible, usable light. But what about this crazy plasma business?  How do we keep our lightbulbs from exploding, erupting in a wild conflagration of uncontrollably excited electrons?  The answer, of course, boils down to the ballast – a controlling piece of equipment that regulates the amount of electricity sent flashing into your tube or spiral.  The oldest ballasts used were magnetic.  Their sole purpose was to restrict the flow of electricity when the alternating current flows forwards – which it does, 60 times a second!  As the current rises, the magnetic coil builds up an electrical field that throttles how much charge can pass through, and then collapses when the current stops.  The collapse of the magnetic field causes the coil to discharge its stored electricity, which reignites the plasma.  This traditionally happens 120 times a second – meaning the constant movement of the magnetic fields can sometimes cause a buzzing sound or interfere with the operation of electronics, or anything susceptible to electromagnetic interference.

As technology has advanced and circuits have become smaller, we have moved away from the older magnetic style ballasts and towards ones with integrated electronic circuits to regulate the firing of the emitters.  These ballasts actually fire ‘pulses’ of electricity via the emitters much faster than the magnetic ballasts – meaning the light ‘feels’ brighter.  They also do not cause anywhere near the same amount of electromagnetic interference, and they prevent you from having to pay for the electricity the magnetic ballasts bleed off lamps.  They are of course more expensive, but generate less heat, don’t make humming noises towards the end of their lives, and waste less electricity.

Of course, if you’re a fan of LEDs (like me!) then you know this is only one of many temporary stops on the lighting train; the rest of us are waiting for technology to catch up with demands for more efficiency, lower prices, and using less resources.  Someday we will move to the world of personal luminescence, wireless light and power, and perhaps – we can dream! – flying cars, too.  Until then, consider getting your very own plasma ball so you can play with fluorescent light bulbs like this: