It isn’t normally within me to speculate on the intangible when there is limited data – but one of the best parts of a new year is pondering over the exciting things the future might or might not hold for the coming year.  The changes in technology are coming so quickly, so affordably, that it is almost impossible not to expect exciting and new developments in the year to come.    Some of these advances are things that come with precedence – with fanfare, with fore-knowledge, with advance warning; some of them are wild suppositions of an over active imagination.  And who knows – these could all just be wild, unrealistic flights of fancy.  All I know is that I can feel the winds of change coming, and it stirs my brain to crazy contemplation!

Now, let’s be honest – the industry is not making any bones about the fact that ‘next-gen’ technology is here, and that people around the globe are implementing things like home energy monitoring, wireless light control, power system monitoring, etc.  It’s a great area of technology to read up on – but I don’t know a single person who has anything like that implemented in their home.  And I feel like, in 2015, that is going to change – perhaps drastically.

Four years ago, I was attending a college – one that had occupancy sensors in classrooms that controlled not only the lighting, but also delicately balanced louvres in the HVAC system, controlling the climate.  It had a central power monitoring system that not only kept track of almost every watt of electricity the building consumed, but also what it generated with its solar awnings and multiple windmills.  This kind of technology is becoming commonplace in the commercial and industrial environment – but it has felt out of reach for the casual consumer who doesn’t have a tech background, a lot of money, or resources like time and patience.

However, with the advent of things like wireless power, smart lights (which one can now pick up at box stores), and DIYer tips available on every internet platform – from blogs to Pinterest to YouTube – people feel empowered and capable.  Not only that, but advances in technology have altered the availability of skilled professionals to install, coordinate, and manage such intricately linked systems.  Once upon a time, designing elaborate lighting systems, switches, and levels meant calling in an expensive light designer and contracting with even more expensive installation technicians.  Today, technology makes the design, install, and programming of home power monitoring and lighting systems available on a small scale and to the casual consumer.  This means you can call an electrician and integrate things like wireless thermostats, power monitoring processes, wifi-controlled lighting systems, and even design lighting systems with variable lighting levels; even pre-programmed systems with light sensors that will automatically adjust for daylight levels – full sun, low sun, and night time.

Now this sounds like a huge jump – what do you mean, cable TV will be abandoned? – but if you think about it, we are already, as a society, moving far away from the basic premise of cable TV.  It may not happen in ‘2015’ as we know it; it certainly won’t happen overnight – but, our society will pull away from paying exorbitant fees for pointless, mindless drivel beamed into our brains on a schedule dictated by strangers.  Not only that, but cable access TV is archaic in technology terms – thick bundles of low voltage wiring piped through utility runs and walls seems quite ridiculous when your phone line can carry more data than three TVs can consume while offering home network access to a whole family.  Instead, we should look for telecoms to merge, dump their low-scoring or producing service aspects (such as Comcast TV, which has the worst CATV customer service score in the industry), pour most of their liquid assets into upgrading data accessibility (fiber optic, everyone?) and shift to providing homes with wireless service.  Comprehensive wireless service: TV and internet, balled together with Smart TVs, wireless dongles, and on-demand watching.  No one wants to watch reruns of the Bachelor – instead, we want to binge-watch every episode of Friends from the very first episode, and do it as quickly as possible.  High-scoring TV shows that utilize audience interaction (such as the Voice or American Idol) give a false positive about our TV watching habits – but statistics show that the number of American households who are abandoning cable in its many forms is rising exponentially each year.  Who can blame them?  After all, we would rather watch data streams we control – and enjoy more – then surf through 400+ channels of gunk, only to leave the TV off more often than on. 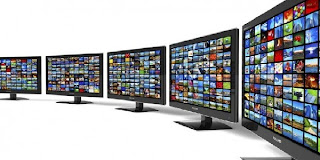 And if that isn’t enough to convince you, consider this: the average household cable bill is something like $123 a month.  A high speed internet connection for a residence (all by itself, with no ‘bundling’) comes in much closer to $47 a month.  You could save $900 or more a year by telling a service you don’t like, that doesn’t do what you want it to, to “Go take a flying leap!”.  If that isn’t win-win, I don’t know what else is!

Some of us already feel like it has – especially with integrated software from Google and Apple keeping track of every place you ever take your phone/tablet, ever, and compiling its’ data with your Calendar, Email, and deducting out your entire life – as well as predicting it, the routes you’ll take, the traffic you’ll face, and when you’ll need to leave – even if it’s a different time, and possibly a different route, every time.  This is super handy data aggregation – but it is also a little freaky.  For some people, this will lead to letting a hundred pieces of software dictate the terms of their lives to them instead of the other way around.  Much like the ‘convenience’ of having data instantly accessible with almost no effort (ala ‘Ok Google’ or ‘Siri’) leads us not to retain anything since our subconscious denotes everything as useless, the ‘assistance’ of calendars telling you when to leave, phones telling you what routes to take, and email monitoring keeping track of your flight and gate data, we might be setting ourselves up for complete and utter ‘tech-pendence’.

Studies have shown that the symptoms of ‘technology dependency’ mean our personalities become reshaped by the technology we immerse ourselves in.  This addict-type behavior leads to sensations of impatience, impulsiveness, forgetfulness, and even narcissism – behaviors that echo our ‘virtual’ ones, only in real life.  Most Americans now feel ‘naked’ if they don’t have their cell phones – and we have actually made our dining out experiences longer and less enjoyable because we devote ourselves to electronic entertainment and not our environment.  Why do we think we have to have a cell phone, a laptop, an MP3 player, a tablet, and a TV?  Does the world really owe us that much entertainment?  What happened to going for a hike instead of checking your social media?  And why are we paying for people to separate us from our gadgets?

The future is coming – it is tomorrow, and in some ways, it is today.  What it has for us is anybody’s guess, really!  What is yours?

Your Last Chance to Vote for 2015 Best of the Springs!