Let’s be honest – talking about low voltage systems like smoke detectors and carbon monoxide monitors isn’t particularly thrilling.  It is most definitely a necessity, however; most building codes now require smoke and CO monitoring on every level of a home, especially near danger zones such as gas-based appliances or  areas of special value – like bedrooms.  And while we are happy to comply with these safety measures that allow us to sleep comfortably at night and leave our homes free from worry, we most likely don’t understand what these systems are, how they work, and the best ways to use them.

These are the most familiar of alarm types – and possibly the most annoying, too.  We all know the 2 am ‘chirp, chirp!’ of an alarm thinking it’s running out of power and desperately crying for attention.  You probably also know the irritation of charred toast, scorched popcorn, or baked on gunk in the oven tripping a shrill series of tweets throughout your home.  These kinds of ear-splitting, frustrating songs are happy to disturb our peaceful day until we circulate enough fresh air to alleviate their alarm – but why are they so gosh-darned sensitive?  Why do they insist on making our lives so razzam-frazzam miserable? 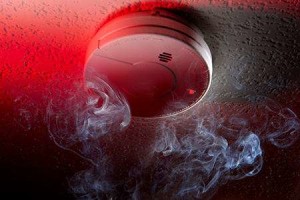 According to a great article on HowStuffWorks.com, smoke detectors are either photoelectric or ionization based.  In the case of a photoelectric sensor, the detector sends a tiny beam off into space, and waits to see if anything reflects light in an eye mounted at a 90 degree angle.  This means the more smoke particles the air contains, the increased likelihood of tripping that raucously noisy alarm.  This alarm is great at sensing smoky or smoldering fires.  Up until very recently, say the last five years or so, the cost of the electronics made these smoke detectors prohibitively expensive for most homeowners.  Recent advents in light and micro-electronics has changed the marketing positioning – making photoelectric smoke detectors super affordable and long-lasting.

The most common smoke detector was usually an ionization detector, which uses ionized radiation to sense for smoke particles.  While it sounds intimidating, the truth of the matter is the reaction is contained inside of a tiny air chamber and in such microscopic quantities that it doesn’t impact day to day life.  Not only that, but using alpha radiation meant the particles couldn’t even penetrate a piece of paper.  Weird, but true – this was a cheap and effective way of detecting smoke that hasn’t evolved much over the years.  According to a California Fire Chief, these are actually the worst of the two designs and can possibly even be completely useless.

According to the National Fire Protection Association, only half of home fires reported in 2011 had smoke alarms give off warnings.  Three of every five home fire deaths occurred in homes that did not have fire alarms, or did not have ones that worked.  Thirty-seven percent of the homes that caught on fire in 2011 had no smoke alarms of any kind.  These statistics are staggering when one considers that a three pack of ten year alarms is something like $70 at your local big box store.  On the plus side, these figures are improved from a 2006 report which discovered that fifty-one percent of reported fires came from homes where there was no smoke alarm or it failed to operate.  The number one reason smoke alarms don’t go off?  Because someone took out the batteries.

The bottom line is that while ionization smoke detectors are the most widespread, they function best at detecting live or active flames and photoelectric detectors sense smoldering or smoky fires best.  Technology has now put both kinds of smoke detection within a very affordable price range.  Some manufacturers now make dual models, in which the alarm can be triggered by either sensor system.  Traditional deaths from fire result from smoke inhalation, so a lot of recommendations come for photoelectric sensors.

Not just the NFPA but all experts agree – smoke alarm replacement should be every 10 years, if not more frequently.  A lot of the new alarms sold at big box stores these days are intended not to have their batteries replaced at all, but instead be completely replaced.  It is not uncommon to encounter customers who seem hesitant to replace their smoke detectors, especially in our work as electricians – “What do you mean?  They’re only seven years old.  Why should I spend $200 on more smoke detectors?  Just change the batteries!”  The ten year figure is not a firm guideline – it is a suggestion as to the barest minimum levels of safety.  Your family, possessions, and peace of mind are worth more than a mild ding to your wallet.

These are detectors that sniff out carbon monoxide – obviously.  Carbon monoxide, or CO as it is commonly referred to, is an invisible gas that has no odor, color, or taste.  What it does have is the nefarious ability to supersede and replace the oxygen in your body with a gas that brings no nutritive value to your system and will eventually make you very ill – if not kill you.  It is a by-product of combustion, and sadly we still do lots of burning in our homes: gasoline, wood, coal, propane, natural gas or oil are all products we are prone to use, for various reasons, all around our homes.

While this type of detector is new, it’s technology is simple enough to understand and utilize affordably.  I remember my best friend in high school had one at her house that constantly gave false alarms – we would wake up at 2 am on a snowy morning and go running outside in our pajamas, waiting for the fire department to come and figure out that the air in her house was completely safe.  These days, the worst false alarm you might get off one is scorching food on a stove or in an oven. 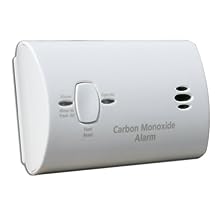 Initially, home carbon monoxide detectors used so much electricity that they absolutely had to be plugged or wired in – but with technology bringing consumption down to 1 watt or less now, battery-operated models are available for wall mounting.  All carbon monoxide detectors rely upon the CO changing the status of something – sometimes it is color changing gel that acts like the human blood, other times it is an electrochemical sensor, or a specially treated semiconductor.  The detector monitors these systems, and when a specific reaction is noted, it triggers the alarm.  The system is designed to react faster to higher concentrations and slower to low concentrations, although the sensitivity levels have improved recently until they trigger for nearly any concentration of the toxic gas.

The most important thing is that CO poisoning is completely preventable.  Aside from the protection of a carbon monoxide detector, the Center for Disease Control recommends the following steps to prevent deadly accumulations of CO in your home:

Depending on what kind of sensor your CO detector has, suggestions for replacement give it an average lifespan of 5-7 years – and even alarm manufacturers themselves give the detectors a recommended replacement timeline of 5 years.  As of 2009, carbon monoxide detectors are designed to have an ‘end of life’ signal which will indicate when their sensing mechanisms are no longer at optimal sensitivity.  The State of Colorado also requires any home being bought, sold or rented to have CO detectors on every floor.

Boring material?  Sure – but of dire importance.  Updating , replacing, and maintaining your home safety tools – like smoke alarms and carbon monoxide detectors –  can be a matter of life or death.

The Ultimate Guide to Multimeters