The Great Debate – Wired or Wireless?

The Great Debate – Wired or Wireless?

Whether ‘Tis Nobler Of The Interwebs to be Tethered or Unfettered

Tied down, or free?  How do you like your World Wide Web?  The truth of the matter is – we like it both ways.  The debate over the pros and cons of both wifi and ethernet is an ongoing battle that erupted when radio frequency signalled surfing became a reality – and continues to this day.  When doing a search for articles related to just this topic, I found some ‘tips and tricks’, hacks, websites, and blog posts dating as far back as 2001.  I also stumbled across articles and reviews written just this month.  Almost fifteen years of ‘intellectual battle’ on this topic and guess what – we’re still not any closer to a solid answer now then we were then!  All this means is that both systems have their uses and benefits, strengths and weaknesses, and your choices should be dictated not by emotion or sentiment but by fact and necessity.

For almost fifteen years the debate has raged on – cut the cords or cling to them?  One of the most remarkable thing about examining 15 years of articles on this very topic is to see that despite promises from manufacturers on improved technology, security, speeds, etc., the game has only changed by a very little bit.  While physical data cables can be a real pain in the tukhus, their service and ability is undeniable.  We plug one end of a cord into something, and the other end into our computer – and voila! – we have connectivity.  The same can never be said of a wireless adapter, router, switch, or network – Mifi, personal hot spot, cell phone tethering, or anything else with an antenna.  When was the last time you connected slot A to tab B and got instant connectivity without installing special programs, modifying router settings, programming network information into your connections center, etc. etc. when dealing with your favorite wireless device?  The answer is of course – never.

Those steps – the kind of convenience represented in terms of quick-connecting – comes at the price of technical ability.  Even people who have no understanding of technology, radio frequencies, security sockets, or internet technology can operate their WiFi wizard and connect to McDonald’s free internet.  What happens when people wield a technology they don’t understand – at its fundamental levels?  Well, usually not good things – but let’s hope this is the exception.  According to attn.com, America is digitally illiterate.  As if to echo this problem, a 2012 survey conducted by Citrix revealed:

I digress here – a wee bit – for which I do apologize.  The point that as consumers we can make informed decisions even if we don’t necessarily understand the technology that creates these opportunities to access the internet. 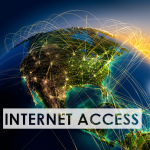 Coming from the standpoint of the layman, without technical training and specific education, how do we decide what kind of connections we should have or use?  The age-old debate honestly has always had a laundry list of factors to consider –  such as installation, user limits, ease of use, security, speed, performance, costs, reliability, setup, maintenance, etc. etc.  To be honest, it might be helpful to look at  what goes into the construction of each type of network – and where they can cause issues, on either side.

Utilizing ethernet cables is, indisputably, the least expensive way to get your computer connected to the internet.  While the cables themselves are relatively inexpensive, they can also be a trip hazard, unsightly, and cumbersome to install or run across or through a whole home.  If you choose to have the wires installed or fished through your walls, be aware that licensed electricians or data specialists carry their own price tag.

Ethernet cables can be very direct conduits to accessing the information superhighway – especially since most home users can plug their computer directly into their modem and POOF be cruising the interwebs.  The speed of ethernet and ease of its use is equaled by its safety – no one can hack, hijack, or otherwise tamper with the data when it is en route from your modem to your PC and vice versa.  Up until very recently (in relative terms of this 15 year debate), ethernet connections were considered the most stable, safe, and dependable for reliable connections.  This made them ideal for file sharing, streaming data, reliable connectivity, video conferencing, etc.  Not only that, but ethernet connections are not impeded by your number of connected users; they are limited only by the hardware such as your modem, switch, or network card data limits.  Your modem and its connection might encounter impedance or bottleneck – but from your PC to the internet gateway will be smooth sailing, often with equipment that can transmit more data than your PC can successfully process.

Say for example a small office whose modem goes into the firewall, and then the network goes through a switch before splitting off into a dozen different things.  One of the things it switches into is a wireless antenna or router, broadcasting a private wifi signal with high security.  The other thing its plugged into is a printer – one that the private network can share and access, even via the wireless router.  This means all the office devices – tablets, cell phones, and desktop units – all have access to a shared, high function printer.  This strategy means the company can share files to each other, to the printer, or into the internet quickly and efficiently – all while maintaining network security.  However – in circumstances like VOIP (Voice Over IP) telephony, where even a fraction of a milliseconds latency (or hesitancy, lag, slowness) can equal deeply uncomfortable phone conversations, then ethernet is the best choice for providing data to your phone service.

Troubleshooting an ethernet system is generally pretty straightforward, as the lowered connections make for limited points of failure.  However, since most computer and internet-based work is now transitioning to the cloud (virtual, off-site hosting), the security of local machines no longer becomes quite as imperative.  Video and data streaming still considers ethernet the only option for stability, integrity, speed, and consistency.

The bottom line is that while businesses and companies may love the security and speed of ethernet, it isn’t as necessary as it once was to guarantee these things – and the appeal of its affordability is seriously hampered by its restricted availability and limited, location-based access.  Some companies – such as Apple – believe ‘wired’ internet is dead and have stopped building in ethernet networking to their laptops.

Wireless networks require layers of security on both sides – both between the internet and the user, and between the user and the modem.  Part of the reason for this is because our data is valuable and we don’t want it infected or polluted.  Another part of the reason is despite the aggressive and intricate levels of wireless keys and security now available, every new electronic or link in the chain of communication introduces another opportunity for exploitation.  The security problems with wireless systems is a bit of a two-edged sword, unfortunately: the same systems that create simple plug and play, connect/disconnect convenience also creates large vulnerabilities.  Encryption keys for wireless systems have grown exponentially stronger, but they really are just a time-delay method or annoyance for skilled exploiters of network vulnerabilities.  Not only that, but utilizing system tools that are wireless – such as tablets, laptops, smart phones, etc. – opens those items to be manipulated, utilized, and abused by an outside user or ‘hacker’.  A wikipedia article paints the casual and yet terrifying picture of an attacker sitting in a business parking lot and accessing a target company’s wireless-enabled laptops (plugged into the business’s wired system) to ‘crack’ their network and access sensitive, highly confidential information.  Unfortunately, each point of access we create for ease and user-friendliness also creates a point of vulnerability that companies must be aware of as they grow and network – most especially, wirelessly.

The convenience of WiFi systems is absolutely unparalleled, however – so much so that we unabashedly have integrated it into every day, everywhere we go.  When we’re eating out, watching movies, working out, or sitting at home binge watching tv shows – we do it without wires to tie us back or worrying about network cables.  On the other hand, these systems are so pervasive that farmers living in the middle of nowhere are using them to control and steer their equipment, as well as track crop growth, rainfall, humidity, pollen levels, wind, and pest infestations.  And this freedom, this liberation is exhilarating and empowering!  With the advent of cloud computing, the resource strain is less on end-users and more on products and providers to perform – leaving us free to enjoy seamless experiences on limited quantities of data.  However, because there are literally an endless stream of users, bandwidth can become problematic – as can troubleshooting, since your wireless device might be suffering thanks to someone else’s poor connection, and the wireless router’s attempt to compensate for their problems.  Not only that, but security is negligible – regardless of diligence – since it’s not just users and devices that are vulnerable, but the data signal itself as well.

Wireless is ideal for casual consumers – browsing social media while eating burgers, checking out what movies are playing, and posting selfies of themselves on the internet.  It is also vulnerable and susceptible to being violated – putting end users and everyone in-between at risk.  Smart users know to limit usage to the inconsequential, keep their hand held electronics free of sensitive or personal information, and enjoy surfing the web without storing data.  The best part is, wireless has been extended and simplified so that anyone can use it with little to no technical knowledge or skill.

As an aside – if you’d like the security of a wired system without the expense of getting ethernet cables installed throughout your home, consider power line systems.  Appropriate on any circuit without high-amperage draw, they use your homes power system to transmit data and can be installed almost anywhere there is an open outlet.

If the question is – wires, or wireless? – then that is a debate you will have to have with yourself.  As a residential consumer it is, like most things in a home: a matter of taste.