A Brief History of Electricity Today

We all know what electricity is – it’s a switch we throw, and juice in our outlets, and the power cranking over our engine when we turn the key.  Most people know what power is – power is a charge, or current, over time; such as the statement we get from the ‘power’ company for using electricity, which is billed in KiloWatt Hours.  What the heck is a watt and why do we use it, anyway?  Did you know it’s named after a Scotsmen from the 19th Century named James Watt?

If we start at the very beginning, our initial exploration of electricity was more like scientific experiments with things like magnetism and static fields.  Our first ‘electricians’ were more like crazy scientists than engineers – designing and experimenting with unknown objects in search of uncertain results.    And yet at the end of the day – or century, or era – what we wound up with was electricity: a controlled flow of electrical charge.  But how did we get there?  What baby steps did we take to make it happen?  Who is responsible for this magical system of voltage, current, resistance, watts, and amps that is our understanding of electricity?

A Top Ten of Electricians Through History (From Ten to Six)

Most sources will cite William Gilbert as the fore-fore-fore father of today’s electric culture.  He was famous for his experiments in magnetism, static electricity, and the first usage of the word ‘electric’ or ‘electricity’.  His work in the 17th century was some of the first science we knew about the studies of electricity, but the truth is that documentation has been found regarding these kinds of experiments as far back as 2750 BC.  Regardless of its origins, our study of magnetism and later electricity didn’t start to get really fun until the 1600s.  This article asserts that electricity ‘was established in the Elizabethan age’:

Otto von Guericke proved that a vacuum could exist. Creating a vacuum was essential for all kinds of further research into electronics. In 1660, Otto von Guericke invented a machine that produced static electricity, this was the first electric generator.

In 1729, Stephen Gray discovered the principle of the conduction of electricity.

In 1733, Charles Francois du Fay discovered that electricity comes in two forms which he called resinous (-) and vitreous (+), now called negative and positive.

Engineers or electricians – perhaps a little bit of both – history is full of stories that may or may not sound familiar about people who discovered tiny fractions of the entire picture and understanding we have now about electricity, electrical theory, and electrical magnetism.  Electricalfun.com includes this startling snippet about a female phycisist born in 1706 whom they consider a key contributor to the growth of the science:

A French mathematician, physicist, and author. She derived from Newton’s work, “Principia Mathematica”, the notion of conservation of energy. Part of this was the understanding that the kinetic energy of a moving object was equal to the mass of the object times the square of it’s velocity or MV². Albert Einstein took this further with his equation E=MC² which described the relationship between energy and matter, and how one can be converted to the other. Du Chatelet also studied heat or thermal energy, and how it is transmitted as light energy which we know today as infrared energy. Her scientific work was not directly related to electricity, but was so significant to understanding energy for its time that we thought she deserved a place with these other pioneers.

Emilie was famous for translating Newton’s work to French and influencing Voltaire, amongst other scholars of her time.  She was a powerful female voice for reason and science, which frequently put her at cross-purposes with the church during the 18th Century.

Benjamin Franklin is a famous name in electrical history, since he was the one who drew the connection between lightning and electricity.  He also drew the ‘modern’ terms of positive and negative when applied to the previous concepts of ‘resinous and vitreous’ electricity.  His famous kite experiment led to the creation of lightning rods and the first understanding of grounding systems against electrical surges and spikes.  Sadly, his experiment actually led to other tragic deaths as many brave souls and educated men tried to follow in his footsteps without copying his system correctly.  While a forefather of electricity, his history as an inventor, author, and creative force seems to diminish the impact his discoveries had on this specific field.

While in heated contest with another inventor (Luigi Galvani, credited as the discovery of galvanizing metal), Volta not only created the first reproducible battery but also expanded the world’s understanding of electrolytes and capacitance.  From his chemical studies on gases, we begin approaching an understanding of using electricity and gases to create flame and light.  The unit of electric potential is named after him in the form of the Volt. 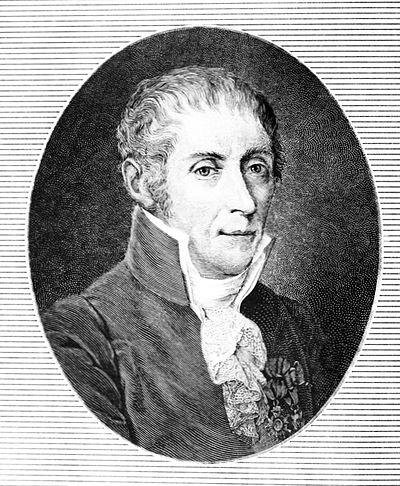 Without both a philosophical and practical understanding of electromagnetism and the fields generating by flowing electricity, power as we know it would be a completely different animal today.  Ørsted’s understanding of electrodynamics and experiments as a physicist shaped and influenced Ampère’s mathematical philosophy; and while science wasn’t able to prove his theory of the ‘electron’ and its movement until much later, his theoretical understanding of both current and magnetism managed to lay the groundwork for future development of technology like electric motors. Ampère’s contributions are memorialized forever in the unit of electric measurement named after him, the Ampere or Amp.

Please join us next week as we explore part 2 of the Top Ten Electricians in history!  In the meantime, enjoy this lovely infographic, courtesy of the Delaware Coop: